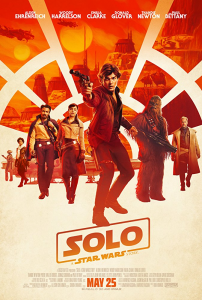 “It is a lawless time” a long time ago in a galaxy far, far away -ouch maybe not that much far-  where “Crime Syndicates compete for resources – food, medicine and hyperfuel”. Untraditionally, this opening crawl is not followed by a panning movement from the space in the recent Star Wars anthology Solo: A Star Wars Story (or Solo in short).

Finally, directed by American filmmaker Ron Howard, it is now being screened in Istanbul at the same time with US (as of 25th of May, 2018) with the highest quality of IMAX 3D.

Lucas himself started to work on a young Han Solo film in 2012, and he warranted Lawrence Kasdan and his son Jonathon Kasdan to write the screenplay. Christopher Miller and Phil Lord (The Lego Movie, 21 Jump Street) started filming by January 2017. However, Lucasfilm and these two prior directors parted ways due to “creative differences” as announced. Howard took over the directing by June 2017, and reshoot almost 2/3 of it. Likely and in that means, Bradford Young as the cinematographer is the least quoted name among the major skeleton.

This spin-off brings out clarity to young Han Solo (Alden Ehrenreich) some of which are: the story of ‘Solo’ as his last name, the first time he met Wookiee, Chewbecca (Joonas Suotamo), his girl friend Qi’Ra (Emilia Clarke), and all the story around his criminal hinterland – a gang of criminals led by Tobias Beckett (Woody Harrelson), a smuggler Lando Calrissian (Donald Glover), the crime boss Dryden Vos (Paul Bettany), Vos’s superior (Darth) Maul (Ray Park & Sam Witwer [voice]), and the lovely democratic droid L3 (Phoebe Waller-Bridge). The audience is also introduced to the born of the rebellion Enfys (Erin Kellyman) when the reign of lawlessness is prominent in an environment of despotic governance.

Similar to other Star Wars theme since 1977, the main flow withstands the questions such as how cruel a galaxy (!) can become when it is short of fuel (coaxium), how it can cheat to win, how the perception of ‘being hostile’ can be altered when an imperial power invades a place far far away, how it can all turn out to be an evil, how the negligible ones can serve the evil to raise themselves as the new villain, and how the word of trust is deleted from the dictionaries: “Assume everyone will betray you. And you will never be disappointed”. Apparently, Solo is based on that aforementioned tagline for this anthology.

Not too much to talk on the directing as explained in the introduction. However, not making a Star Wars film as a high-ranking comedy is a smart and favorable conclusion indeed. It would only be advisable if the story included several tight junctions or binding points to the current Han Solo for a catchy excitement. Nothing to talk much about the acting either as Star Wars was never on the acting predominantly. One thing can be that the visual effects and 3D technology could have been emphasized more significantly. And although the music by John Powell is not that crummy, it will always be a glitch not to hear the striking classical sound of John Williams’ Star Wars high notes.

After five months from “The Last Jedi”, Lucasfilm (producer) and by Walt Disney Studios Motion Pictures (distributor) released Solo which has been already reported to gross $83.3 million in the US and Canada, and $65 million in the other territories as of May 27, 2018. The estimated production budget being around $250 million figures out that it will need to gross at least $500 million worldwide to meet the expectations.

A living story, nicely shoot, and not in a galaxy far far away.. It is only a few miles away in a theater to your home. Highly recommend you all to see!…